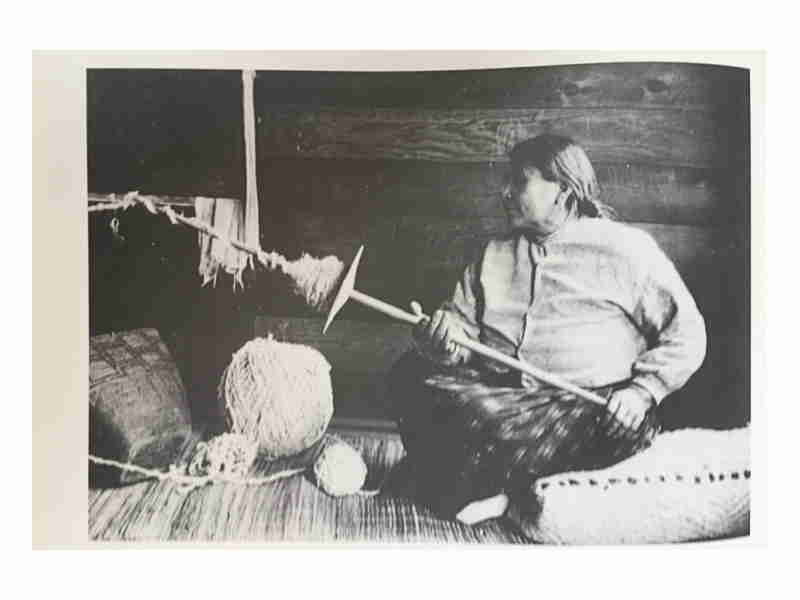 Woolly Dogs
by Elizabeth Flower Anderson Miller
I have been studying since 1987, the wool dog or woolly dog, grown for at least 700 years, possibly 2500 years, by the First Nations or Native American peoples in the areas now western British Columbia and western Washington. I just presented at a conference at the Sto:lo nation in B.C. what I knew about the dog grown by their ancestors, including information I gathered from spinners on this forum.

Also, I am interested in hearing from anyone who has spun American Eskimo dog hair, or owners or breeders of Eskies about that dog’s hair, especially if they have a dog with the recessive genes that caus the soft insulating hair to be longer than the guard hairs.

Wool dogs, (woolly dogs, or wooly dogs,) were bred in at least four places in the Americas prior to contact. The four area dogs may have been distinctly different breeds with heavy loads of long hair in common or there could have been some contact and exchange. Their heavy, easily matted, easily spun long hair provided fiber to weave many items in the Pre Columbian Mexican areas, for belts and tumpline weavings. In South America somewhere east of the Peruvian Andes, small two bar looms produced belts and tumplines. In the Four Corners area of the southwest U.S.A., dog wool was manufactured into many of the products later surplanted by sheep’s wool.

But the unique breed of woolly dogs was used most extensively for its fur fiber, to weave the famous and now rare “Salish” blankets, in the Northwest Pacific Coast area of North America, along the inland coastal and rivers of what is now Washington State and British Columbia.

Found in a Millikan, B.C., archaeological site, a stone spindle whorl, more than 700 years old, bears the likenesses of two dogs. Sites up to 4500 years ago may be evidence of the weaving, but I haven’t yet seen the actual reports from those digs in British Columbia.

The Salish, Nootkan, and nearby peoples who used the dogs have many ancient stories about the dogs and blankets, and the stories are intricately woven into the fabric of their cultures. Many of their artifacts bear the likenesses of dogs.

Blankets were prized items in the rich, pre contact, potlatch distribution economic system, along with slaves. At one point, eight blankets could buy a slave. When the longhouse ‘chief’ had visitors, hundreds of blankets were piled along the roofs to show off the prestige of a man who could command such skill among his extended family. The shortage of fiber from dogs and the popularity of blankets led to the use of mountain goat fur, nettle and Indian hemp fibers, milkweed pod, and cottonwood fluff, feathers, cedar twine, and other materials to extend the supply of yarn.

The dogs were kept in little flocks of about 12 to 20 animals, fed raw salmon and parts of salmon, dried, smoked,and leftover cooked salmon. Sometimes elk tallow and liver were added to the diet to make the coat shine. To keep the breed true to type and the preferred white color, the wool dogs were separated from other dogs, confined on islands, in fenced pits, or gated caves, to be especially bred during their once a year estrus. The dogs were shorn of their long, thick fur in May or June. The shorn wool was so thick that Captain Vancouver could pick up a corner and the whole pelt would hold together.

The fur was washed, then cleaned by beating diatomaceous earth or kaolin type white clays, to full it, very much like was done to sheep fleeces of England. (White Cliffs of Dover type material) It was carded possibly by using the finely made wooden combs. I haven’t seen evidence that teazles were pre contact, though certainly of use had they been.

The dog wool (and any additional material) was spun off of a 3 or 4 foot stick with a spindle whorl attached partway down. The short end of the stick held the cleaned and carded wool. The long end of the stick was rubbed across across the thigh, into a fine yarn which was doubled and twisted into a two ply yarn, with the yarn being pulled from the center of the ball for weaving.

A number of natural dyes and mordants were used to color the wool–among them Oregon grape root for a bright yellow green; blue and greenish clays for those colors, a liverwort from the large leafed maple for a ‘real good brown.’ An orange-red lichen traded or fetched from the basalt cliffs along the Columbia provided a reddish color. Women’s dyeing parties, to share the dyes and the equipment, persisted into the time sheep’s wool was used.

The ‘Salish’ blankets, were usually woven on a four or five foot high two bar loom, sometimes leaned against a wall, where the warp was looped around the upper and lower bar. The blanket could be rolled around to the area convenient to being worked. A cedar basket stich where the yarn was wrapped around each warp, or a twill weave often formed the weft. The blankets were usually finished at the ends with a fringe from the cut ends of the warp or somtimes from the extra length of weft on each side. Stripes, zigzags, plaids, and little patch shapes were woven into handsome patterns.

In many longhouses, only the noble people could own the dogs or the weaving tools. Sometimes only the men, sometimes both men and women could own them. At an owner’s death, the equipment was sometimes burned. The weaving was done by women of the extended families, and only ones that were allowed the privilege could learn the skill, though perhaps already skilled captured slaves were employed in some cases.

But when the fur trade began, in the 1850’s, the Hudson Bay Company blankets, made of the warmer and more waterproof sheeps’ wool, became very popular. Sheep were introduced within a few years, as well. One old lady whose high class mother was a skilled weaver, sniffed, in 1989, “Oh, you mean poor men’s blankets.” Her mother used sheep’s wool when Jean Fish was little.

Along with the economic disincentive to keep the animals, the decimation of the indigenous population by plague after plague (of smallpox, influenza, and other diseases,)the breakup of the cultural patterns, including the legal prohibition on the potlatch, and, very probably, introduced diseases and parasites wiping out the dogs, the dogs became rare. They were evidently house dogs, unable to care for themselves. The last one I heard of, owned by a Skodomish man, died in 1940.

Sadly, the unique blankets have nearly vanished, with only a few dozen left, scattered across the world. Several attempts at reintroducing the weaving have sputtered out, partly because the grants which support the effort have been for only one year, and the skill and reintroduction of the weaving tool crafts take longer than that.

My own research notes finds that the dogs were not grown very far north of Vancouver Island. I believe the dogs may have carried the “Malamute” factor, where a set of recessive genes cause the underfur to grow much longer and thicker than the guard hairs. This is a lethal flaw in the arctic for ice, mud, and snow cling tenaciously to the insulating fur, while normal dogs’ guard hairs usually shake off the snow, mud, and ice in just a few moments. The factor would certainly add to the spinability of the fur.

Also, few or no wool dogs, nor other dogs–bear dogs, burden bearing dogs, hunting dogs, curs, were not found along the western– most coasts and up the rivers spilling into the Pacific Ocean. The reason is those coasts and river areas are home to a snail that is one of the tri-vector hosts of a parasite, whose other vectors are mammals (like otters and muscrats)and salmon. Eating raw salmon, the primary food used for the dogs, if infected with the parasite, causes a 90% or more death rate, though dogs that recover are afterwards immune.

A picture of the woolly dog in the arms of two Salish looking girls, recently discovered, and in the Chilliwack Museum archives, a J.O.Booen glass plate negative, made 1895-1897, shows a dog very like the many dog-like artifacts, and also much like a spitz type dog of a terrier or Alaskan Eskimo dog traits. This possibility needs to be traced. The very heavy matted hair, the nose, the stop, and the general size and shape of the dog, the suggestion of a chin, the wideset ears all fit into the several descriptions of the dog. This is a very exciting find. The museum has a modest base cost for the print which may be copied for non-commercial use, but a $15 charge for reprint in newspapers, magazines, and books.

I, too, will give permission to use, if for tribal or band non commercial educational purposes, but others please ask permission to copy this work. I have available, a nearly complete bibliography of sources as well, and a publication which may be bought for museums, libraries and others.