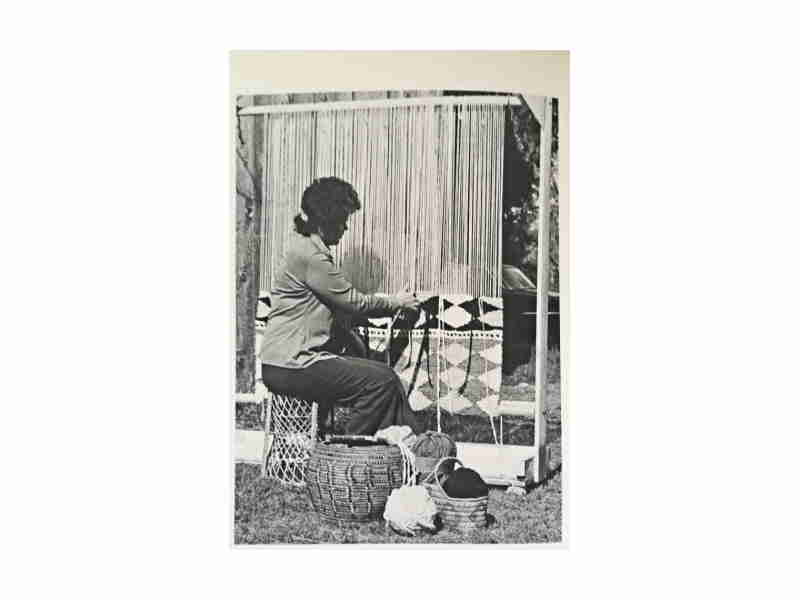 The Salish were known as the weavers of the Pacific Northwest. They used the materials around them, hair from mountain goats, and fibers from native plants such as Indian hemp and stinging nettle.

Salish blankets and other weavings were collected by Captain James Cook on his expeditions to the northwest coast. Many are now in museums collections throughout the world. Looms found at archaeological sites in the area measured 5 ft. in height and 6 ft. in width. Looms were warp frames, consisting of 2 upright sides embedded into the ground. Crossbars fit into carved slots on the sides. The lower crossbar could be loosened to release the tension. The warp was rolled forward as the weaving progressed. The crossbar was tightened and weaving continued.

The Salish are known for their twill blankets. As the looms did not have heddles that could be raised, the twill designs were all hand-picked, the weft crossing the warp, over two and under two.

The yarn was spun on spinning whorls made of wood or whalebone, measuring 3 to 6 inches in diameter. Some natural dyes were used, but the Salish preferred the texture of the twill weaves to elaborate designs. When other yarns became available through trade, the Salish adapted their traditional techniques to the new materials.

More about Salish Weaving
Salish Woolly Dogs
Eflowera tells of a special breed of wool dog whose hair was spun by the Sto:lo Nation for use in their woven blankets.

About the Nations of the Pacific Northwest
A gallery of native art.

Sto:lo Artistic Traditions
The formal elements of Salish artistic design and the revival of the Salish weavers guild.
The Last Viking: The Warp and the Weave
A history of weaving and spinning in the Cowichan valley and the use of dog wool.

Do you have any experiences with Salish weaving? We’d love to hear about it.