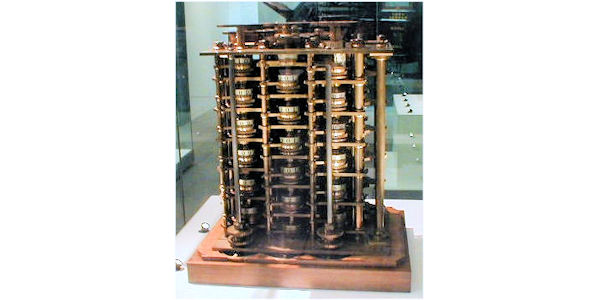 Did you know that the loom and the computer are related? In 1740 Jacques de Vaucanson designed the first usable automated draw loom. The control system he employed in his design was a metal cylinder with studs, similar to the cylinders used for player pianos.
Later in 1801, Joseph-Marie Jacquard further developed this idea and simplified the automatic loom through a system of perforated cards.

His father was a weaver, and his invention simplified complex treadling sequences. His Jacquard loom became the precursor to the computer. The holes in the cards controlled which shed rose in a particular pattern sequence – similar to the system of punch cards in early computers.

With the invention of the automated Jacquard loom, came the threat of unemployment. The silk weavers threatened Jacquard with death, and his looms were sold as junk.

The idea to use punch cards for information input into his analytical machine (which was his ‘second generation calculating machine after the difference engine) was Babbage’s, being inspired by Jacquard’s loom design. Babbage actually visited the silk weaving studions in Lyon to see the Jacquard looms in action. 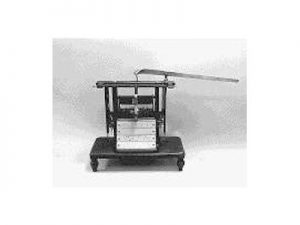 Ada Lovelace was a publicizer of Babbage’s ideas and designs about automated computation. IBM was born from the tabulator (sorting information recorded on punched cards) designed by Hollerith to deal with data collected for the 1890 US census. He was an ingenious engineer, but not a good salesman, so in comes Thomas Watson and Charles Flint (a super salesman and an archetypal capitalist) and the birth of IBM in the early 1920’s.
The punch cards were replaced by microprocessors and here we are now, connecting via the Net. Whether we working at our looms, designing our drafts in the latest weaving software or are surfing on the internet, it seems that the two are connected.

Many thanks to Anneliese Recklies for editing and providing additional information regarding this article.

Jacquard’s Web: How a Hand-Loom Led to the Birth of the Information Age

More about Computers and Weaving
Mechanical Aids to Computation and the Development of Algorithms
The textile industry was the motivating force for the development of modern day computing or data storage.

Computer: Looking back
J.A.N. Lee’s column in Computer, relates the development of the Jacquard loom to IBM’s mechanical card-processing machines.

Introduction to Programming
Hand weavers, realized the cards possessed a value separate from the machine. The cards contained the pattern for the cloth, instructions for the machine and were the first examples of what we would call a program.

The Jacquard Loom
Although weaving is an intricate and delicate task, it is also repetitive. Joseph Jacquard automated the patterning through his system of punch cards.