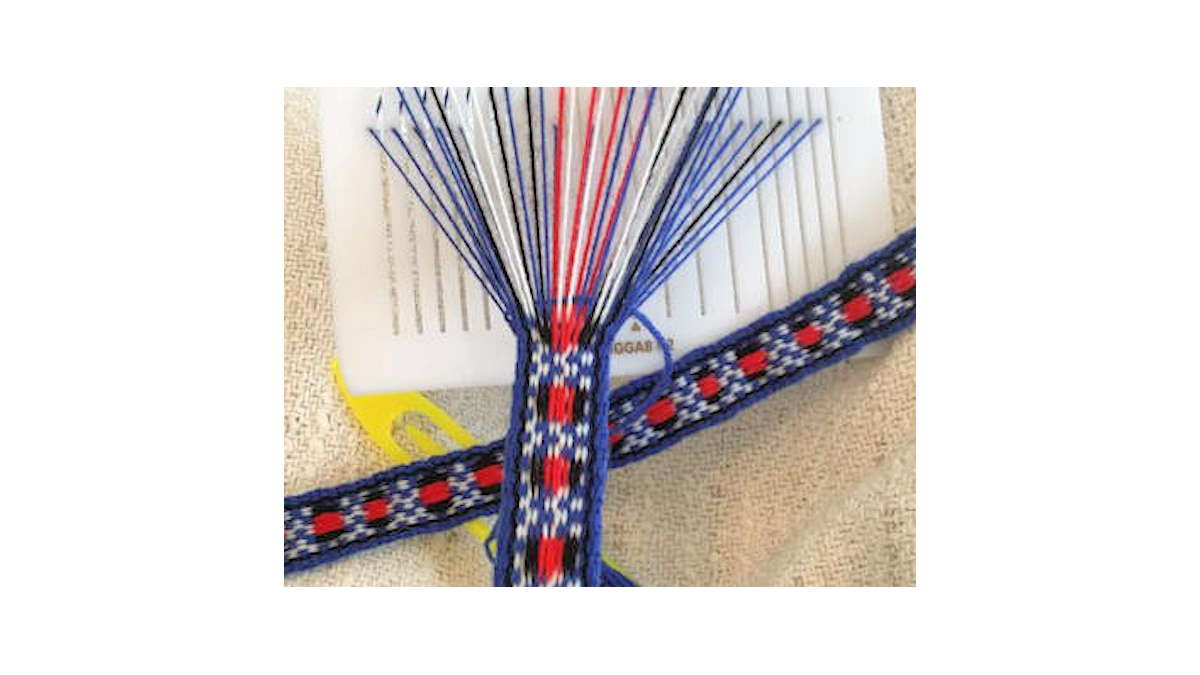 Sami band weaving has traditionally been woven using a small reed made of wood or bone. The heddle has long slots alternating with small holes for the warp. The band is woven by raising or lowering the heddle and passing the weft through the warp opening.
Stoorstalka from Sweden have redesigned the traditional Saami weaving reed using modern materials. Stoorstalka have also designed 3 different styles of reed with additional holes and slots to make weaving patterned bands a bit easier to weave.

One of these is the Sigga Heddle.
The Sigga heddle was designed for weaving block style patterns,traditionally worn by the Ume Saami and Lule Saami.
Sami Band Weaving

The Sigga Heddle has alternating long slots and small holes that are designed to carry the background warp for the woven band. The Sigga style of reed weaves a tabby weave structure for the background of the band.

The Sigga Heddle also has several shorter slots in the centre of the reed. These are for the pattern warp threads.
When raising or lowering the reed, the pattern threads float in the middle of the warp.
When warping the reed, it is suggested that you use a slightly finer weight of yarn for the background threads and a heavier weight of thread for the pattern threads. This helps to make the pattern more visible.
Personally, I think that the Sigga heddle is the easiest reed for a beginner to learn about patterned band weaving.

To add additional pattern variety to the woven band, you may pick up and raise part of the middle pattern threads, instead of all of them.
The patterns are generally woven with 3 repeating picks of the shuttle, though you may want to experiment with a varied number of picks to see what pattern effects you can create.

Sigga 8 Pattern Draft
Here is a weaving draft that I recently made using the Sigga 8 weaving heddle.
I used the same weight of wool yarn for both the background and the pattern threads. In my next project I will use cotton for the background and wool for the pattern threads.
Warp: Áhkko 4 ply wool yarn. This is a wool yarn developed by Stoorstalka (the wool is spun in Italy) and is pure wool, non-superwash.
To make a 2 meter belt, I threaded 3 meters of warp yarn.
I used the same 4 ply wool yarn for the weft of the band.

Paivatar Yarn on Etsy
If you are looking for Stoorstalka weaving reeds and supplies, please check out my shop on Etsy and at my Paivatar Yarn webshop.