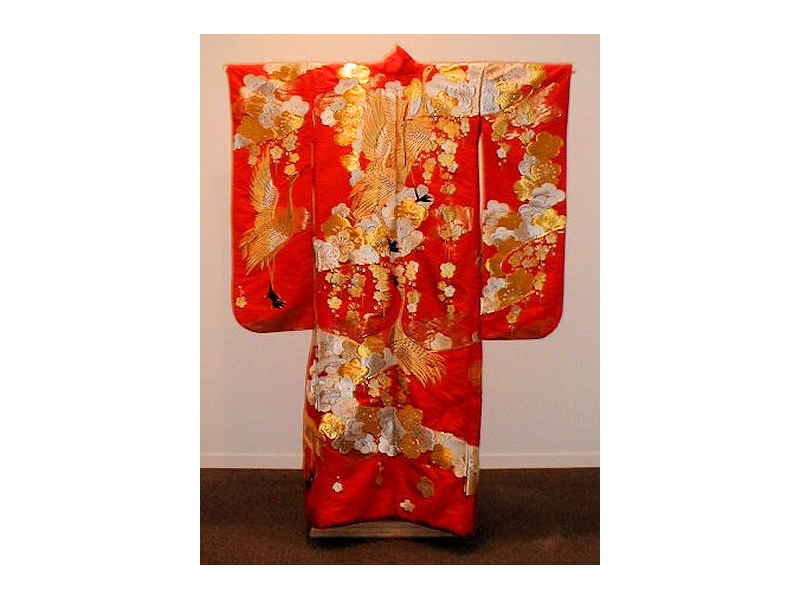 About traditional Japanese kimono, and obi.

Kimonos date back to 300 A.D. (the Jomon period) and were were made of hemp. The Chinese introduced the raising of silk worms to Japan in the Yamato period (300 – 550 A.D.) Dyes and sewing techniques improved in the Asuka and Nara periods ( 550 – 792 A.D). The kimono became longer and more elaborate with added jackets and back and front skirts.

In the Heian period (792 – 1192A.D.) the colours changed with the seasons. In the Muromachi period (1192 – 1573) there was a decline in the aristocracy as the Samurai gained power. With the more active lifestyle, the clothing became simpler.

During the Edo period (1601 – 1867) Yuuzen resist dye techniques were developed. Complex patterns such as flower and bird motifs became popular. In resist dyeing, a rice-past resist is used. As the dye is brushed on, the resist protects other areas of the fabric, keeping the dye inside its border. Several layers of colour can be applied using this technique.

Japanese Kimono on Exhibit at Textile Museum of Canada

Clothing Patterns from the Weaving Room
A book filled with patterns you can sew easily with your handwoven fabrics.