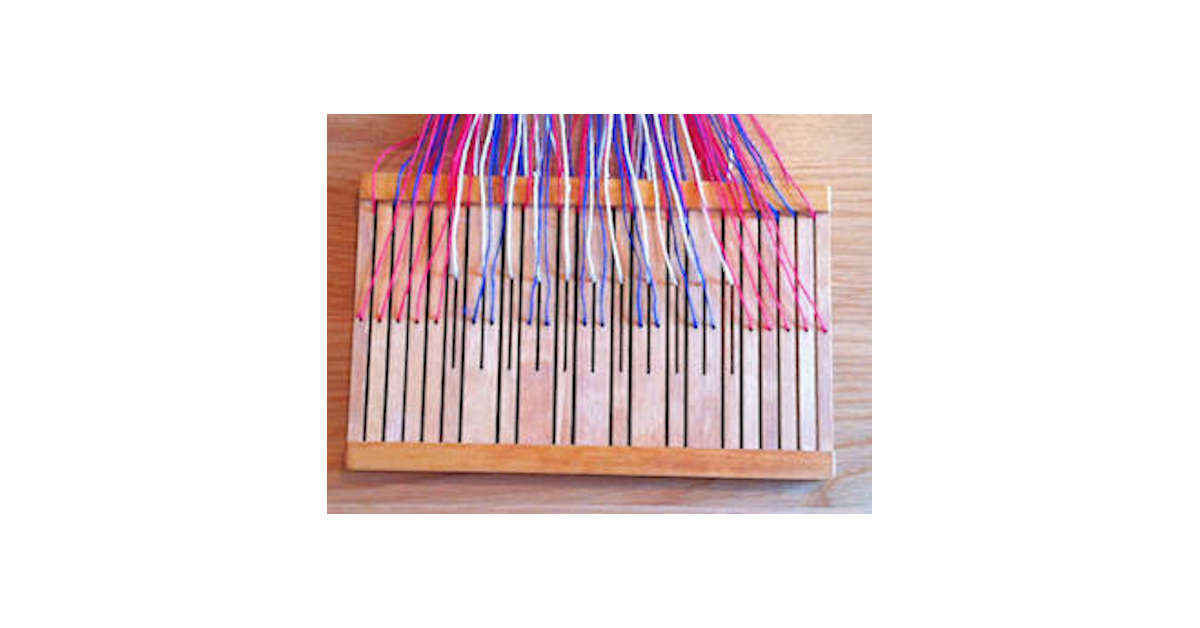 I found this Sami weaving reed in a small craft shop in Sweden. It is used to weave traditional Sami style belts and bands. The reed is similar to a standard rigid heddle but has an extra set of slots that are designed to carry the pattern warp. The regular holes and slots carry the background warp threads. The background warp weaves a basket weave pattern and the pattern threads float on top of the warp threads.

As I was researching about how to weave pickup with this loom, it was recommended that the warp should be attached to a weaving belt tied around your waist (similar to a backstrap loom) or to a ‘weaving board’ where the front and back of the warp are tied to pegs attached to a long wooden board. Since I don’t have a handy DIY guy who could make such a weaving board for me, I found an art board at The Coln Gallery, my local art shop that I thought would work instead. I attached the front of the warp to the bottom edge of the board with a large paper clip. And I tied the back end of the warp to the warping board that is attached to my loom. As I weave, I advance the warp and tighten the tension on the paper clip. This method seems to work quite well.

When you raise or lower this weaving reed, the background warp threads lift or lower, creating a shed for weaving. The pattern warp threads remain in the center of the shed.
This makes it quite easy to pick up the pattern threads that you wish to raise according to the pattern.
So that I don’t get mixed up about when to raise or lower the reed, when I throw the shuttle from the left, I raise the reed. When I throw the shuttle from the right, I drop or lower the reed.
The weaving draft can be read from the top down or from the bottom up, according to your preference.

Throw the shuttle from the left to the right and gently pull the weft thread to adjust the tension.

Then beat the previous weft row into place using your finger and adjust the tension for an even beat.

Throw the shuttle from the right to the left and pull the weft thread into place, adjusting the tension.

Felting and Finishing
When you weave this belt, the weave structure will be quite loose, similar to when you are weaving a wool blanket or other item. After weaving, it is best to lightly felt it, so that the weave structure will come together. The weave pattern has long floats. Once it has been felted these floats will work their way into the cloth.
I felted this belt by handwashing it quite vigorously in the sink – with a bit of dish soap and hot water. And rinsed in cold water to help shock the wool and make the felting process go more quickly.

You can now purchase them in my PaivatarYarn Etsy Shop