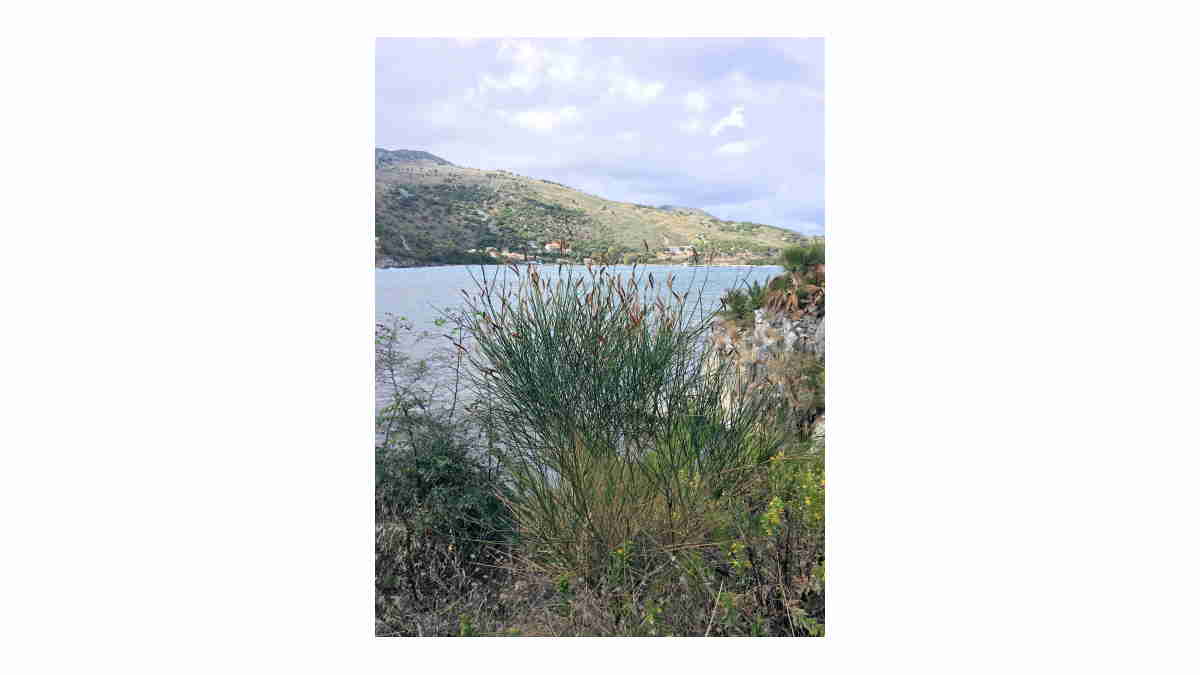 Sparto (Sparta) Spartium junceum also called Spanish Broom or Weavers Broom is an almost forgotten textile plant that is native to Mediterranean countries. Spanish Broom was introduced to North America and other countries where it has spread in many areas and has become a menace. However, Sparto was once a very useful textile plant.

There are references to weavers broom plants being used for making ropes, footwear, nets, mats, cloth and stuffing for pillows. The flowers are fragrant and can be used for making scented soaps and perfumes. The flowers are also a good source for yellow dyes.
It is thought that the use of Sparto as a textile plant diminished because the fibre is more difficult to process by mechanical means, compared to flax.

The Sparto plants grow along the rocky seasides of coastal Corfu, Greece.

I go on holidays to Corfu every year, where I have a chance to visit with my friend Agathi the weaver. Every time I visit, she pulls some wonderful textile treasure from her many shelves and tells me about it. This time, it was a bedspread made of hand spun Sparto that was made as part of her dowry.

As Agathi does not spin, the Sparto yarn was hand spun by a friend of hers, using a drop spindle. The bedspread was woven on a narrow loom and neatly stitched together in long panels. The handspun Sparto yarn was used as weft along with cotton yarns.

Agathi explained how the Sparto was collected and processed for hand spinning. The process is very similar to that of processing flax fibre.
The stalks of the Sparto plant are cut and then laid to ret in sea water along the shore. Rocks are placed on top of the fibres to keep the Sparto from floating away. This retting process usually takes 3-4 days. The warm salty water breaks down and softens the fibre so that it can be removed from the plant.

The fibrous part is on the outer core of the plant and the woody stem is in the centre. After retting, the fibre is dried and then beaten with a rock or wooden mallet (or scrutched) to help break up the woody core. Agathi described the fibre that is removed as being ‘soft and cottony’ The fibre is then hackled or combed and spun with the drop spindle.

Agathi said that the best time to collect Sparto is in May or June when the stalks are tender and green. I took a short foraging trip along the coast line to see if I could find some of these plants. In September, most of the Sparto have dried and are in seed, but I did find a few plants that were still green. I cut some stalks and brought them home for sampling.
(In the UK, you can purchase Spartium lyceum plants but they are not very hardy in our climate.)
As we live by the seaside, we took a short trip to collect some seawater for my experiments.

I had collected about 400 grams of Sparto stalks, so I placed these into a large bucket of sea water. The stalks are quite long so I had to fold them to fit them into the bucket.

I will leave the Sparta fibre to ret for a few days and check them daily to watch progress.

Well, it took more than a few days to ret the Sparto – more like a month. I suppose England is not as warm as the mediterranean sea.
The soaking bucket fermented and the Sparto stalks have softened.
I removed them from the bucket and rinsed the stalks with the garden hose. The stalks are now drying in my airing cupboard.

The Revival of Sparto
University of the Aegean, Dept of Product and Design Engineering
A research study on the potential of a forgotten natural fiber in today’s world