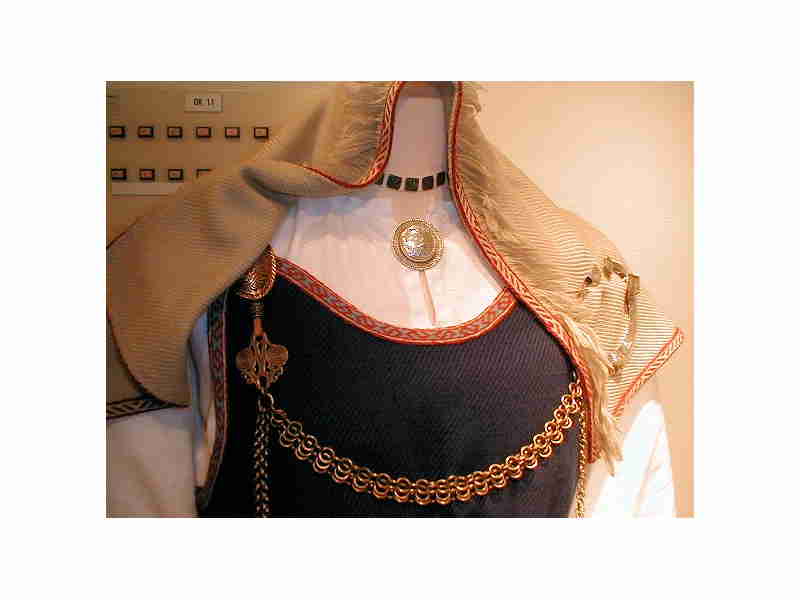 In October 2003 I had the chance to visit the fascinating exhibit of ancient Finnish textiles, in Tampere, Finland.
The Sinihameet kultavyöt exhibit featured both textile fragments found at various archaeological gravesites from the Viking Age in Finland, and modern recreations of those textiles.

Weavers and textile artists at Pirkanmaan Kasi ja Taideteollisuus Ry
and Opintotoiminnan Keskusliitto put together the exhibit, wove the fabrics and produced a book about these textiles.

Very few textiles have been found at archaeological sites, because textiles decompose fairly easily. Also cremation was an early practice. At the Finnish grave sites, partially preserved textiles have been found in the women’s graves, because the women wore jewellery and ornaments made of bronze. The bronze gases helped to preserve the textiles. Because the men’s graves had swords and tools made of iron, their clothing did not survive the dampness. The use of bronze ornamentation was unique to Finland and other Baltic regions’. In Scandinavia and elsewhere in Europe, gold and silver were predominant.

At the archaeological site, the placement of the clothing and textiles were carefully recorded. From these, the purpose of the clothing could be determined. The textile fragments were analyzed for fibre content, yarn twist and sett. Where the fabric had deteriorated, the dust residue was analyzed to determine its content.

Most fabrics found at the gravesites sites were made of lambs wool. Few samples of linen fabrics survived, because linen and other vegetable fibres decompose more rapidly in the acidic environment. Although fabrics were classed as ‘linen’ or flax, they could also have been hemp (hamppu) or nettle (Nokkonen) as both of these plants also grew in the region. Specific fibre analysis has not been done to determine which type of vegetable or bast fibre was used.

”Yarns were spun with a Z twist. Some fabrics also used plied yarns with an S twist. The yarns would have been spun on a drop spindle (Värttinä). In some parts of Finland the single ply yarn was used only as weft, with the plied yarn being used as warp. In other parts, both warp and weft were a single ply.

Generally, the clothing consisted of a ‘linen’ undershirt with outer clothing woven of soft wool. Blankets or cloaks were also found that were made of coarser wool.

The clothing was often trimmed with narrow woven bands. These were attached to the edge of the fabric by weaving them in. The warp ends of the cloth were woven as weft into the band.

The clothing was trimmed with colourful woven bands, that were used as ties or belts. Although the fabrics at first glance looked brown, on closer study many of the band trims used red and blue yarns. Because yellows and greens tend to fade more easily, it was difficult to see whether these colours had also been present. By using chromatography analysis one could determine the dyeplants that were used. However, the expense of this type of analysis is prohibitive.

Blue was the most used colour in many of the fabrics from the gravesites. Blue may have come from Dyers Woad, Värimorsinko (FI) Vejde (SE) Isatis tinctoria, but this is questioned by archaeologist Juri Peets because woad is not native to Finland and was exported from Southern Europe in 1000 A.D.

Thelephora
With iron or tin mordants, yields greens and blues.
, Tuoksuorakka
Sarcodon imbricatus,
Suomuorakas
Yields blues if it is old and its top has darkened.

Red could have been dyed with madder (Rubia tinctoria) which was used in central Europe since 800 A.D. but it is unknown whether it was imported to Finland during the Iron Age. Red can also be produced from native plants such as:

To produce reds from these plants much more of the dyestuff is needed for strong colours than with madder, approximately twice the weight of dyestuff to yarn. Because only small amounts of yarn were dyed – for the narrow bands, it is possible that the local plants were used. By varying the temperature and acidity of the dyebath, different shades of reds, oranges and violets could be produced.

St. John’s Wort Hypericum perforatum,
Hyperisiini
The stems and flower buds of the St. John’s Wort can produce orange/reds. To get stronger colour soak the stems & buds in alcohol for a few hours before placing in a dyebath. Reds from Mushrooms The Dermocybe family of mushrooms produces oranges and reds. Addition of an iron mordant gives darker shades and almost black. With older mushrooms, longer cooking times or the addition of ammonia can give lilac shades. Low heat or the addition of acid or vinegar gives warm reds.

By studying the archaeological records, fabric remains, and descriptions recorded in books such as Kalevala, weavers designed the clothing, using modern yarns that were available to them.

The she stepped to the shed-hill
stepped inside the shed
opened the best chest
slammed the bright lid back
and she found six golden belts
and seven blue skirts
and she put them on
she decks her body.

She set the gold on her brows
the silver upon her hair
the blue silks upon her eyes
the red threads upon her head.