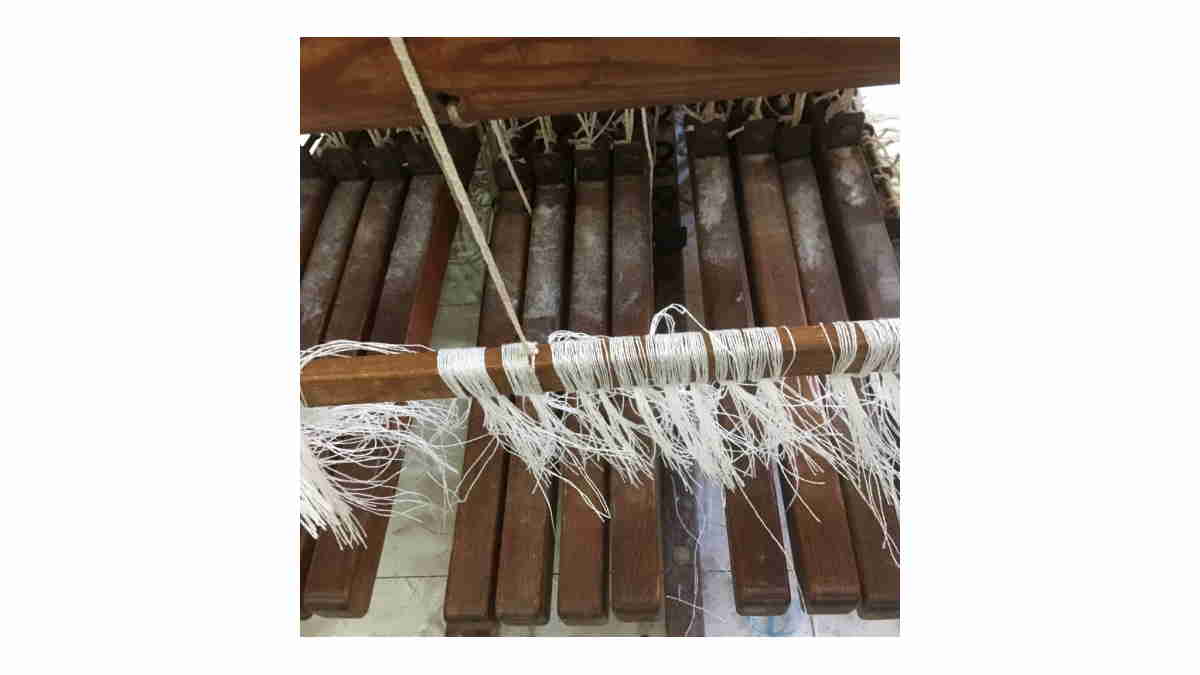 My studio is filled with weaving looms of many sizes ranging from large floor looms, to 4 shaft table looms, band looms and inkle looms. If you are a weaver, you will have noticed that during weaving, dust bunnies collect under the loom. In the past, I haven’t been too concerned about this except to pull out my vacuum cleaner and clean it up.

However, a few months ago I caught that flu bug that has been making its rounds, with one of the symptoms being an annoying cough that doesn’t seem to go away. After about a week, the cough seemed to clear up, but another week later, it came back. Many of my neighbours had it, and also friends in Canada said it was making the rounds there as well.

So I wasn’t too concerned about the cough, and thought it was just more of the same thing. I did notice that my cough seemed to be worse about a month ago when I wove a lengthy linen warp. The loom dust under my loom was very fine, much more so than when weaving with wool yarns.

Over the recent months, I have also made a transition to dyeing wool and cotton yarns using natural dyes, rather than the vinegar/acid based dyes that I have used previously. Many of the natural dyes come in fine ground powder form, often using wood chips such as birch bark, logwood, brazilwood, madder root.

The fine powder is placed into the dyepot, the pre-mordanted yarn is steeped in the dyebath for a few hours and then removed. The yarn is rinsed out in the sink and hung up to dry. After drying, there is still a lot of fine wood chip dye residue left on the yarn. I rewind the skeins into yarn balls or reskein. During this process, much of the natural dye residue falls off. I vacuum the fine dust from the floor.

A few days ago, I started to weave a Sami style band on my table loom. I was using a combination of wool and natural unbleached cotton yarns. I dyed the yarns using natural dyes.

After I wove for a bit, I noticed that some loom dust was collecting on the table, under the loom. I vacuumed this up in the evening before I left the studio. The next morning I returned to weaving this band. After about 2 hours, I had another terrible coughing fit. And again, I noticed an accumulation of loom dust under the table loom.

And I start to wonder, how much of this fine dye dust or loom dust am I breathing in? Can this be a cause of my almost chronic cough?
At that point I took some allergy medication and went out for a walk in the fresh air. My breathing seemed to clear up and I had a full nights restful sleep. The following day, I was away and didn’t go into the studio. I have felt much better the past few days with very little coughing.

I spent a few hours on trusty Google to research about the environmental hazards of the craft and textile work that I do. I have since ordered an air purifier (Vax ACAMV101 Pure Air 300 Air Purifier) and dust ventilation masks.

I looked for an air purifier that has high CADR ratings hoping that it will be effective in clearing much of the harmful dust from the air.
I am now waiting for the air purifier and dust masks to be delivered before I continue working in the studio.

As natural dyers we are aware that many mordants used in natural dyes can be dangerous to your health. For example, Rhubarb leaves are used as a mordant but are high in oxalic acid that is corrosive, and can cause acid burns, ulcers, and is hazardous by skin contact, inhalation, and ingestion.

Sodium hydrosulphite or sodium diothinate which is often used when creating an indigo vat, can be explosive when added too quickly to the vat. When heated or allowed to stand in basic solution, sodium hydrosulfite decomposes to form highly toxic sulfur dioxide gas. For those who use acid dyes, vinegar or acetic acid fumes can cause damage to the lining of the nose, throat and lungs.

Some natural dyes themselves also contain toxic chemicals. For example, Logwood contains hematein or hematoxlyn can be poisonous if inhaled, absorbed through the skin or ingested. Madder root contains alizarin and purpurin that have been associated with kidney damage in animal experiments.

Wood chips and wood dust such as birch bark, logwood and other tree barks are also used as natural dyes but can also pose dangers to your health. Breathing in wood dust can cause allergic reactions, asthma as well as nose and lung cancer.

I also tend to have a high sensitivity to moulds, so I try to avoid working with natural dye fermentation types of dyes. The indigo vats that I have seem to be ok, but I notice that as soon as the natural dye pots start to ferment (usually after a few days) they make me ill. So I dispose of them immediately. As lovely as some of the natural fermented colours can be, in my opinion, it’s not worth the health risk to myself.

Although I work on a small scale and not in a large industrial setting, textile hazards are still something to think about. Be careful when handling any type of dyestuff or mordant, even if it is ‘natural’. Wear appropriate protective gear, gloves, facemasks, clothing and ensure that your studio has good ventilation.

References:
Textile Dust and Endotoxins
Exposure to Dust and Endotoxin in Textile Processing Workers
Cotton Dust – Impact On Human Health And Environment In The Textile Industry
A Study on Health Issues of Weavers (Handloom Weaving)