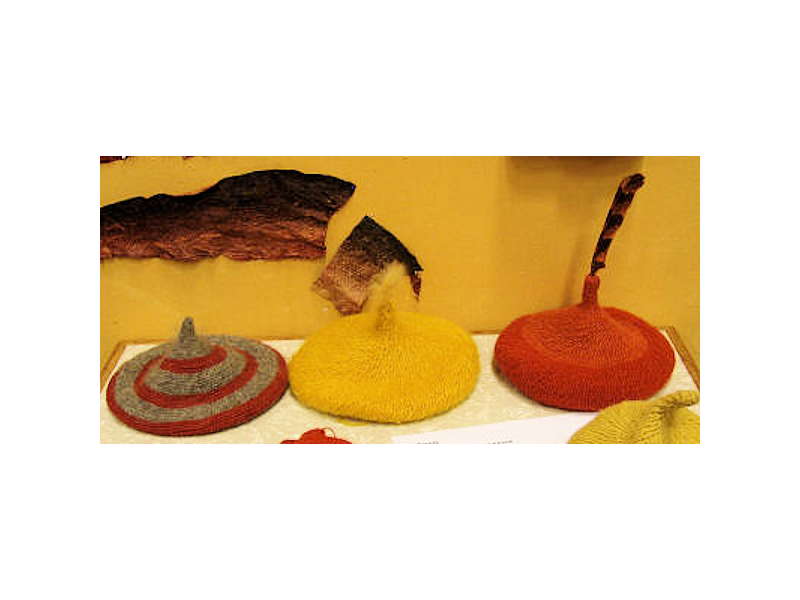 It is commonly thought that Viking clothing was rough “sack-cloth”. Not so. Viking textiles influenced and were influenced by the many countries in which they travelled. Viking Cloths have described as layers of simple but well fitted garments, using wool, linen, horsehair and dog hair.

Vikings used fibers and yarns that were readily available in their area. In England and Sweden they had access to linen. Silk was also used in the ninth century. In Scandinavia, very fine cloth with counts of 14×11 and 24×12 threads per cm. have been found. Viking fabrics were often made of worsted wool in twill patterns. It can be assumed that Vikings produced fine fulled cloth (Vadmal) as fulling mills dating to the later Viking period are found in Britain.

Fabrics were woven on warp-weighted looms. These looms consisted of a roller beam on top of a heavy frame and shafts of heddles that raise and lower the warp threads. The warp was attached to the roller beam and held under tension by weights consisting of soapstone or Icelandic volcanic stones with natural holes. Stones were attached to the bundles of warp threads. As the cloth was woven, it was rolled up onto the beam. It was difficult to produce even edges in weaving because the weighted warp hung freely. The warp-weighted loom later was replaced by the more efficient horizontal loom, that had a shedding mechanism operated by foot pedals (similar to today’s floor looms).

Wool was spun using a drop spindle made of wood or bone, and weighted with a whorl of bone, wood, clay, stone or metal. After spinning, the yarn was dyed using natural dyestuffs. The more wealthy Viking could afford brighter and more colourful dyes. Black dye was produced by making a mixture of cochineal (red), woad (blue) and weld (yellow). White was obtained by bleaching the yarn with wood ash.

Tablet weaving was also popular during Viking times. The tablets are made of flat squares of wood or bone with holes in each corner. These are threaded with the warp with the warp yarn and held in the hands. By turning the cards forwards or backwards by half or quarter turns, the warp threads are raised or lowered. Gold wire and colourful threads were used in the weft, producing intricate patterns.

In Finland, the edges of cloth was sometimes trimmed with a tablet woven band. The warp threads of the cloth were woven as weft during the tablet weaving of the band.

The Middle Ages in Finland were influenced by the Vikings and ancient outfits. Threads were spindle spun. A typical dress required 30 kilometres of single-ply thread. Strong colours were preferred. Birch leaves were used for yellow. Red came from the roots of northern bedstraw. Blue from dyer’s woad, and green’s from blood-coloured cortinarius and juniper berries. >mushroom dyes may also have been used for dyeing their clothing.

Female Viking Dress is reconstructed from remains found at Birka.

Nalbinding Books
Nalbinding – What in the World Is That?
Nålbindning – The easiest clearest ever guide!
Nalbinding Made Easy
Viking: Dress Clothing Garment