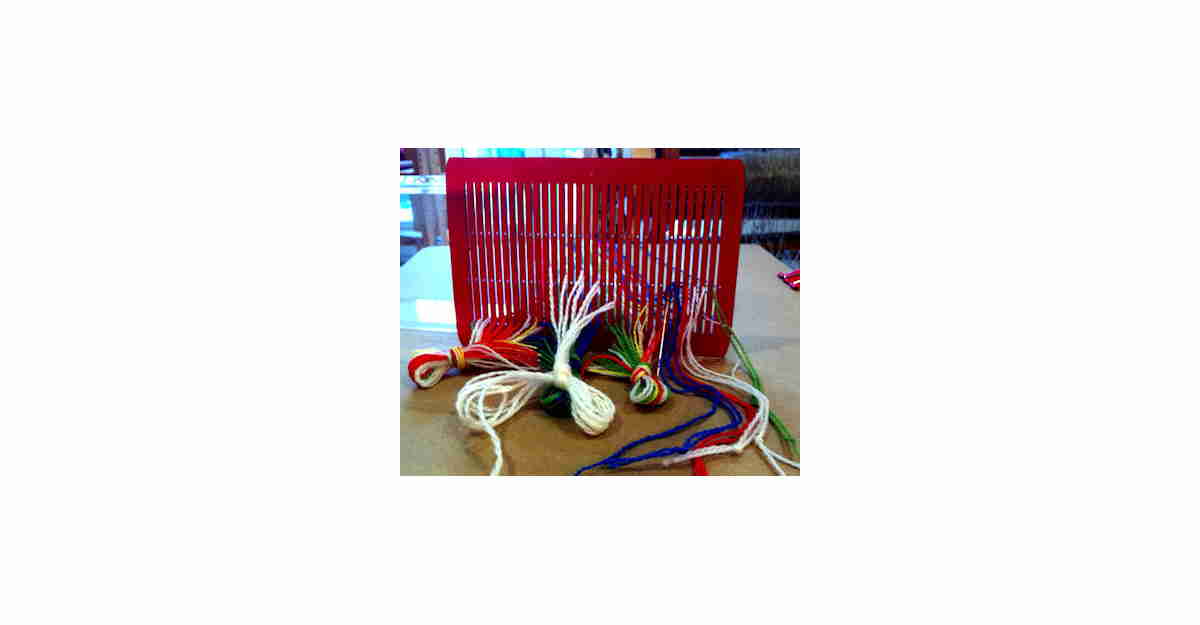 From high-tech to low-tech weaving –
My latest handweaving obsession is studying more about the weaving of narrow bands, belts and braids done by my ancestors. After finding a unique double slot weaving reed during a trip to Sweden, I did some more research on these small and portable weaving reeds used by the Saami people of northern Scandinavia.
I had seen some photos of weaving reeds in museum collections that had 2 holes instead of one on a small rigid heddle.

The additional hole is for the pattern warp thread and makes it easier to weave pickup patterns. The pattern warp thread is picked up to float above the ground weave or pushed down according to the pattern.
During my research I found a Sami loom maker Stoorstalka who makes traditional Sami style weaving reeds using modern materials. I contacted them about these looms and they very kindly designed a weaving reed to my specification.
I am delighted with the result and look forward to spending many delightful hours weaving these colourful and unique style of belts.

Beaivi Loom
You can now order your own Sami 2 hole weaving reed from my Paivatar Yarn shop on Etsy.

Beaivi Wikipedia
Beaivi (or Päivi in Finnish) is the Sami name for the Sun or Sun deity. In Sami myth, she travels with her daughter Beaivi-nieida through the sky in an enclosure covered by reindeer bones, bringing green plants back to the winter earth for the reindeer to eat. She was also called upon to restore the mental health of those who went insane because of the continual darkness of the long winter.

This is my first attempt at weaving with this loom. I decided to keep the pattern very simple at this stage, and to concentrate on getting my tension right. I found this weaving reed very easy to use. It is lightweight, easy to thread and very pretty to look at. The threads do not snag, as they did on the earlier wooden version that I had.

The warp ends are tied similarly to when using weaving cards or tablets. One end of the warp is tied to a post – I tie the warp ends to the warping board that is attached to the back of the loom. The other end can be tied to a belt around your waist as in backstrap weaving. I found that clipping the warp threads to an art board that sits on my lap as I weave, an easier method to use, as my back doesn’t hurt while I am weaving, and it provides a surface to rest the weaving pattern and the weaving reed on as I work
.
Weaving with a Double Slot weaving reed.

How to Weave on a Double Hole Rigid Heddle Loom
When you push the heddle down, the pattern threads (Black) move into the middle of the heddle – the top warp threads of the ground warp are raised and the bottom warp threads are lowered.

Lift up the weaving reed to change the shed.

Put your hand into this shed and beat down the previous row and adjust the tension.

Change sheds by dropping or pushing down the weaving reed.

Again put your hand into the formed shed and beat down the previous row and adjust the tension.

Adding Beads to Weaving
I thought I would experiment with adding a few beads to this woven band. I used seed beads and strung them onto a length of yarn, similar to the yarn I was using for the weft. I threaded this yarn through on a weft row and positioned the seed bead in between the warp threads and beat the weft into place, and wove the next weft row with the regular weft yarn I had been using.
The loops of weft yarn will be sewn in and trimmed off during finishing.

Double Hole Rigid Heddle Loom
If you are looking for something new to add to your loom collection, why not add one of these from Stoorstalka?